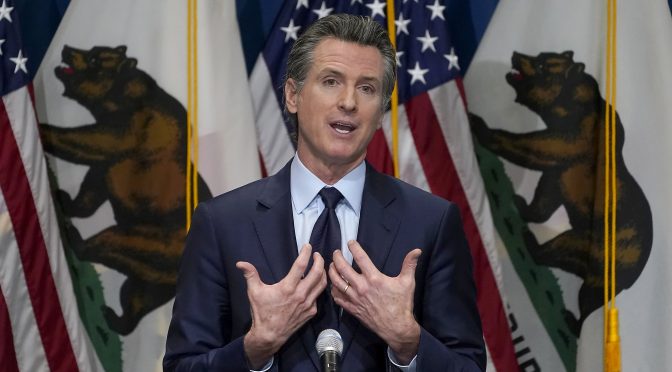 SACRAMENTO — As California enters the final stretch of its 10-day sprint to inoculate a million more people against COVID-19, the state is far short of its goal — another potential blow to Gov. Gavin Newsom’s rollout of the coronavirus vaccine.

To reach the million-vaccine target that Newsom has touted, health officials would have to get about 500,000 more shots into people’s arms by the end of Friday, quadrupling their pace of recent days. California had already administered nearly half a million doses total when the governor set his goal last week, and as of Wednesday, the total stood at 971,829, according to the state Department of Public Health.

Sahar Robertson, a spokesperson for Newsom, said data through Thursday was not yet available because it takes vaccine providers time to report how many doses they have administered. She said the state would have a full picture of its progress in reaching the benchmark next week.

“By issuing this goal, we have undoubtedly seen an uptick in the pace of vaccinations, and we look forward to continuing to partner with local counties and the health system to reach our goal,” Robertson said in a statement.

Distribution of the vaccine has run behind expectations nationwide, but California’s rollout has been criticized as particularly slow and confusing. The state reports that local health departments and hospital systems have used only about one-third of the doses they have received, among the worst rates in the country, according to the Centers for Disease Control and Prevention.

Since last week, Newsom has promised several times that the state would vaccinate an additional 1 million people by Friday. He suggested that the target was meant to ramp up the urgency around inoculating Californians.

“The reason that we set a goal of 1 million is that we are sending an urgent call across the spectrum,” Newsom said at a news conference Monday. He said California needed “an all-hands-on-deck approach to accelerate the equitable and safe distribution of vaccines.”

But the governor’s penchant for embracing audacious goals, such as a sudden ramp-up to 1 million vaccinations, could backfire on him if the state falls short.

Rob Stutzman, a Republican political consultant, said trust in Newsom’s response to the pandemic has already been undermined by public outrage over a dinner he attended in November at the French Laundry in Yountville and an unfolding scandal involving major unemployment fraud. Now he could also develop a reputation for being unable to deliver the vaccine, turning his credibility into a political liability.

“He does seem to have a penchant for setting bars that he can’t clear,” Stutzman said. “People would be forgiving if there was the impression that the best effort was being made. But if you make a promise and you can’t deliver on it, then you’re setting yourself up for failure.”

The clock on the 10 days began ticking Jan. 6, when California had administered about 480,000 doses, according to the Department of Public Health. That means the state is aiming to have nearly 1.5 million people vaccinated by the end of Friday.

But an analysis of state data shows that California has administered an average of only 61,500 vaccine doses for the past eight days, slightly more than half what it would have needed from the start to reach Newsom’s goal. That number is slowly improving, with the state reporting that 82,787 people were vaccinated Wednesday.

Dr. Yvonne Maldonado, an infectious-disease expert who has been involved with the vaccine rollout at Stanford University, said California and other states are challenged because investment was skewed toward vaccine development rather than the public health infrastructure needed to get it to people.

“You can do all the high-level planning,” she said. “From the beginning, we never had any money from the federal level for this last mile.”

Attention has also turned recently to California’s complex tiered system for prioritizing who gets vaccinated, starting with health care workers and residents of long-term care facilities. The state relaxed those rules this week, opening eligibility to anyone 65 or older, as it searches for ways to speed up vaccinations.

Dr. George Rutherford, an infectious-disease expert at UCSF, said state officials were right to pay close attention to ethical questions about who should be vaccinated first, but plans have been tripped up by the complex logistics of distribution.

“This is probably an example of perfect being the enemy of the good,” he said.

Rutherford added that he favored moving toward a system of mass vaccinations sites, to simplify the process of reaching large numbers of patients at a time: “Let’s just move people through.”