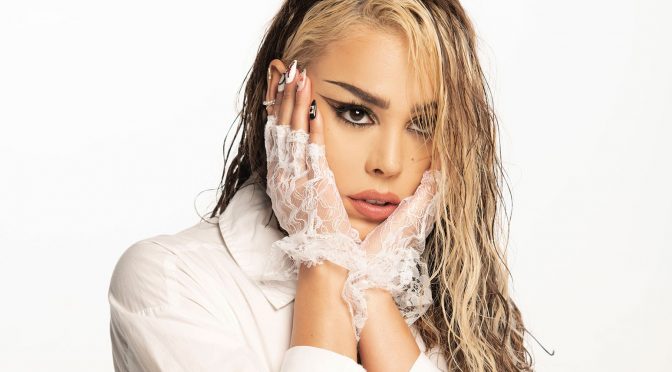 “I had to learn how to put myself first and I think the entire album has that vibe,” she says. “It was very important to empower myself through my music.”

In celebration of her new set, Billboard asked Danna Paola 20 questions. Check out her answers below.

What’s the best word to describe your new album, “K.O.”?

Personal. I would say it’s my most personal album yet because I was involved in every way. The art, the lyrics, the music, the visuals, the videoclips, just all of it. This is my newborn baby.

Which song on the album do you connect with the most and why?

“Amor Ordinario.” This song is my most personal track on the album. It defines my emotional process and everyone that heard it felt my pain and what I went through from beginning to end. I wrote this song in January 2020 and I had to understand what ordinary love meant and that I deserved better.

Which song on the album do you think will become a fan-favorite and why?

I hope all of them! I created this album so that my fans can understand a personal part of me.

The first one I wrote was “Friend de Semana,” when I was living in Madrid back in 2018. The last song that made it on the album was “Justified,” which I had for about five or six years — but I knew it was the missing piece for my album.

Focusing on my mental and emotional health. I feel very happy at this point in my life, but I’m trying to find a balance between my career and my personal life. Professionally, I have another project in mind that’s a music concept I’ve been working on for the past three months. I know I’m launching my new album, but I already want to work on my next album and discover new artists to work with.

What’s the first piece of music that you bought for yourself, and what was the medium?

It was Selena Quintanilla’s “Amor Prohibido” and an album by Mecano, both were CDs.

What was the first concert you saw?

The Jonas Brothers in 2009. I was filming a telenovela and I had the opportunity to go watch them in concert. It was my first concert ever where I bought my own ticket and everything. I saw them again in 2019.

What did your parents do for a living when you were a kid?

My dad was a musician — he was part of a boy band — and my mom was a kindergarten teacher.

Who made you realize you could be an artist full-time?

Since I can remember, I’ve always wanted to be an artist. Of course, my parents have believed in me and supported me since I was a little girl. I also had to believe in myself as an artist, and never give up, especially when I returned to music. I also think all the support I received from my fans made me believe I could be an artist full-time. Thanks to them, I am where I am.

What’s at the top of your professional bucket list?

How did your hometown/city shape who you are?

I’m a very proud Mexican. I think Mexico is a very special country and it’s made me passionate about music. The Mexican audience is difficult to conquer but they’re incredible and I believe that’s what has helped me grow as an artist.

What’s the last song you listened to?

“My Immortal” by Evanescence. It’s really dark but I’m in a mood.

If you could see any artist in concert, dead or alive, who would it be?

Michael Jackson, Beyoncé, or Lady Gaga. I’m a superfan of those three artists because they are great performers who give it their all on stage.

What’s the craziest thing you’ve seen happen in the crowd of one of your sets?

This one time a male fan asked if he could propose to his boyfriend during my show. It was so special to see them get engaged in one of my concerts with my music. I will never forget that night — they made me believe in love again.

“I Wanna Dance with Somebody” and “I Will Always Love You” by Whitney Houston. Never fails.

What movie, or song, always makes you cry?

I’m a full Cancer, I’m always crying with all the movies and songs. Movies are The Notebook and A Star Is Born. Songs? Every time I write a song, I cry. I also remember listening to “Dias Raros” by Vetusta Morla when we were filming [Netflix thriller series] Elite and I cried so much. It breaks my heart.

What TV series have you watched all the way through multiple times?

Elite of course! Gossip Girl, Breaking Bad — and I think I would watch Dark again. I think it’s one of the craziest series I’ve ever seen. I was on edge the whole time and a lot of things made sense.

What’s one thing that even your most devoted fans don’t know about you?

They know everything about me, and sometimes I feel like they know more than I do. But, I have to make my bed before I go to sleep. Everything has to be perfect — the sheets, the pillows. I like to sleep without anything bothering me.

If you were not a musician, what would you be?

An actress full-time. But I also love gastronomy, so maybe a chef.

What’s one piece of advice you would give to your younger self?

Don’t open your real heart to those who won’t take care of it. You never know how people will take advantage of you. I’ve been very selective with the people in my life.