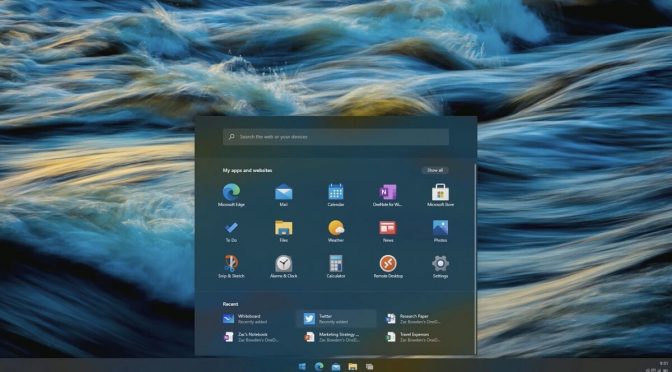 This week we got our first look at Windows 10X for single screen PCs. Now, a supposed near-final build of the software has been created by the community after Microsoft uploaded files for build 20279, giving us a much better idea of what Windows 10X will look like when it’s pre-installed on machines shipping later this year. Spoiler alert: It takes a lot of design cues from Chrome OS.

Both The Verge and Windows Central got their hands on the pre-release build of Windows 10X, which unmistakably looks like Microsoft’s answer to Google’s Chrome OS. It’s a lightweight take on Windows 10 that looks primed to target enterprise and education circles.

In Windows Central’s video, we get a good idea of what using Windows 10 will be like, from the reworked taskbar to running progressive web apps (PWA). The video demonstrates some of the software’s settings, the process of installing a PWA, and running apps side-by-side. It’s an interesting glimpse at what Microsoft has planned for those who want a more lightweight, tablet-esque experience.

Windows 10X isn’t something you’ll be able to upgrade to. Rather, the software will come pre-installed on new machines similar to laptops that run Chrome OS. If you’ve been tempted by a Chromebook but are embedded in Microsoft’s ecosystem, the arrival of Windows 10X will be exactly what you’re looking for.

Credits: Tom Warren for The Verge

Windows 10X was originally meant for foldable and dual-screen devices, but last year Microsoft announced it was reworking the software for single screen PCs. The result looks to be an experience that will provide users with access to Microsoft services in a more affordable package.

We’re expecting the first Windows 10X devices to launch later this year, but an exact timeframe hasn’t been revealed. Similarly, we’re not sure how much these devices will cost, but if we had to venture a guess they’ll be in the $400 to $700 range.

If you’re curious to test out Windows 10X yourself, Twitter user thebookisclosed shared a download link to an “emulator-esque image” that can be installed by following user NTAuthority’s guide.

Would you like to toy around with a newer build of Windows 10X yourself? I built an emulator-esque image (read: use in Hyper-V only)

Simply create a Generation 2 VM and use this as its disk:https://t.co/7mQOA8ldUM